In the Musicians’ Chapel of St. Sepulchre-without-Newgate, just opposite the Old Bailey, can be found the tomb of Sir Henry Wood alongside which has built up a host of other musical treasures.

Wood, born in 1869, was familiar with St Sepulchre’s from an early age as his father sang tenor in the choir for several years. From the age of ten he was allowed to practise on the organ, “the magnificent Renatus Harris organ in St Sepulchre’s, with its wonderful diapasons and ten stops on the pedals, filled me with wonder and admiration”. In his biography, Wood tells of the

“comic little person who used to blow for my practices…I fear I often had a little joke on him by pulling out the heavy reeds at the end of a Bach fugue. He would come rushing round – with only his trousers on – dripping with perspiration. ‘Three men’s job this mornin’, sir! Werf more’n a bob a hour!”

From the age of 14 Wood studied organ, piano and harmony with the new organist, Edwin M Lott. However, he describes how during the ‘farcical’ lessons, Lott would disappear down the nave ‘to listen’, and frequently ended up in the Viaduct Tavern next door!

Henry Wood died in August 1944, after conducting the Promenade concerts for a full fifty years. His ashes were brought to St Sepulchre’s, where his musical life had begun, and on the 14th June 1945 they were interred in St Stephen’s Chapel (later to become the Musicians’ Chapel). It is fitting that the ashes of Sir Henry Wood should rest in the church which he loved from his childhood. Beneath the beautiful window dedicated to his memory is a mural tablet which bears the inscription:

This window is dedicated to the memory of
Sir Henry Wood, C.H.,
Founder and for fifty years Conductor of
THE PROMENADE CONCERTS
1895-1944.
He opened the door to a new world
Of sense and feeling to millions of
his fellows. He gave life to Music
and he brought Music to the People.
His ashes rest beneath. 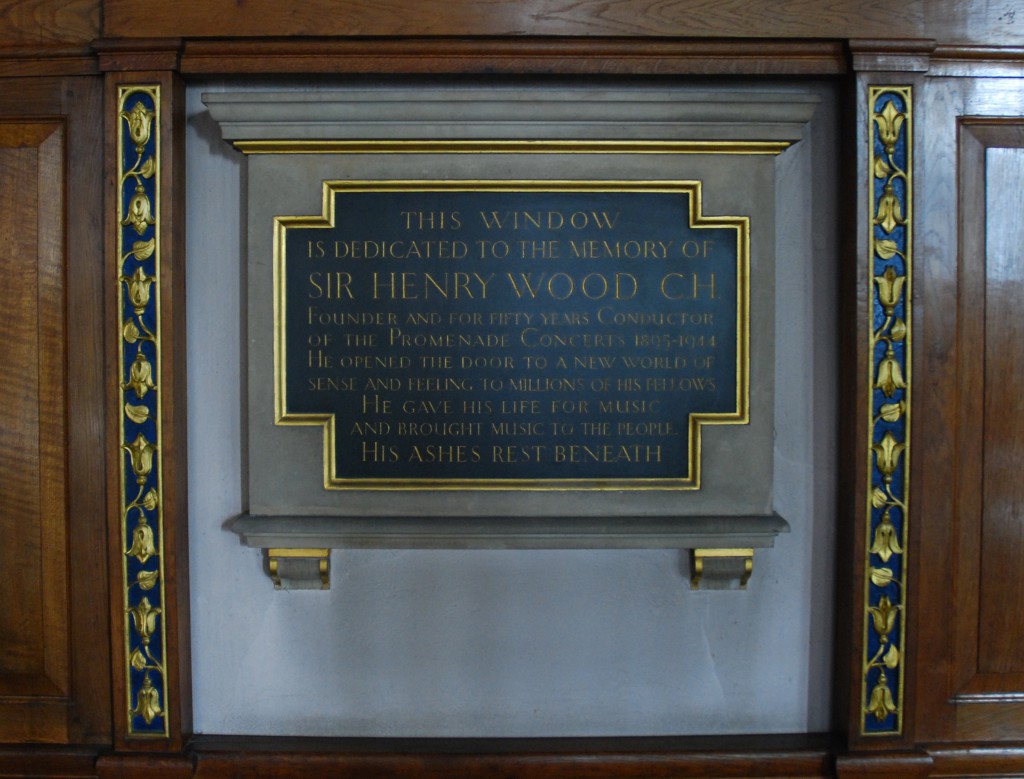 The following year, on 26th April, a memorial window, designed by Gerald E.R. Smith in collaboration with Frank Salisbury, was unveiled in St Stephen’s Chapel by the Lord Mayor of London. The service featured the choirs of St Paul’s Cathedral and Westminster Abbey, as well as the BBC Singers and BBC Chorus, supported by the London Symphony Orchestra. Lesley Woodgate conducted the BBC Chorus in William Walton’s new composition “Where does the uttered music go?”, a setting of words written especially for the occasion by Masefield. Ralph Vaughan Williams’ “Serenade to Music” was performed by an ensemble of soloists, including several who had sung in the first performance, conducted by Wood himself in 1938. In his address, the Dean of St Paul’s Cathedral said that; “from then on St Sepulchre’s would be a central shrine for music and musicians”. 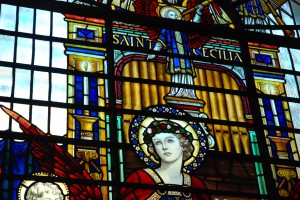 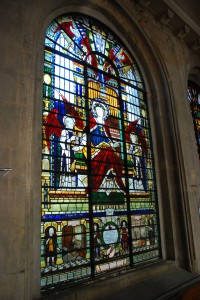 On learning of Wood’s death in August 1944, the well known singer, Miss Granger Kerr, made the suggestion of a “Carnation” fund (Sir Henry Wood invariably wore a red or white carnation in his button-hole when conducting) to which admirers of the conductor might like to subscribe one or more “carnations” towards a permanent memorial such as a conductor’s rostrum in the proposed new Concert Hall, planned to succeed the Queen’s Hall which had been destroyed in the war. When the project of a new Concert Hall fell through, she decided to give the sum of £250, subscribed for this “carnation tribute” to open a fund for a Musicians’ Chapel in St Sepulchre’s Church. This fund was augmented by many other donations as well as by a collection taken at a recital given at St Sepulchre’s by Kathleen Ferrier, with Gerald Moore at the piano, on September 30th, 1952.

The dedication of the Memorial Chapel by the Dean of St Paul’s, W.R. Matthews, took place on Sunday January 2nd, 1955. It was attended by a large gathering of musicians, mostly composed of members of the Incorporated Society of Musicians who were holding their annual conference in London. The orchestra, also composed of Society members, was conducted by Sir Malcolm Sargent, whilst the BBC Singers, conducted by Leslie Woodgate, performed “The House of the Mind”, composed specially for the occasion by Herbert Howells. Recently, a newsflash film about the dedication service was discovered at St Sepulchre.  This can be viewed below:

Everything in the Chapel – the chairs, furniture and over one hundred embroidered kneelers – has been given by, or in memory of, a musician. Around Henry Wood’s tomb are windows in memory of the the Australian opera singer Dame Nellie Melba and the composers Walter Carroll and John Ireland. 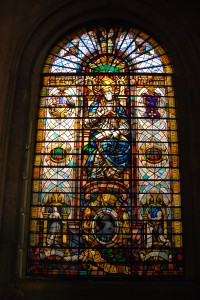 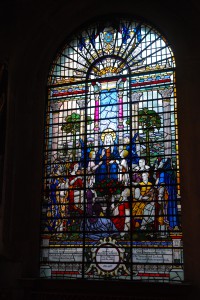 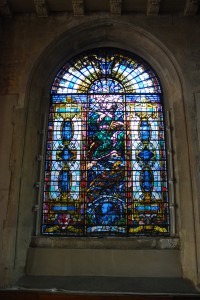 Against the west wall of the Chapel is the Musician’s Book of Remembrance in which are now inscribed the names of over two thousand professional musicians. “For some there be who have no memorial: who have perished as though they had never been”. Some of the most famous names in English music are recorded in the Book. But there are many whose influence on their generations was no less significant – those who “found out musical tunes”, whether as composers, performers or teachers of the art of music. The Book is now maintained by The Friends of the Musicians Chapel, who also organise an annual Commemoration service, with music provided by each of he London music colleges, in which new names are inscribed in the Book. 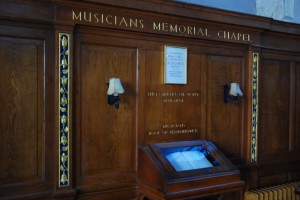